Over the course of five years, I’ve taught countless lessons to my children. Many of which were memorable, while others were soon forgotten. The joy of homeschooling is simply that, teaching my children at home. But in this span of time, every so often I get a lesson from any one of my children that impacts me down to my innermost being and changes me at my core.

This past Saturday, on a warm, breezy afternoon, I once again was privy to an amazing tutorial with my sweet daughter at the helm. 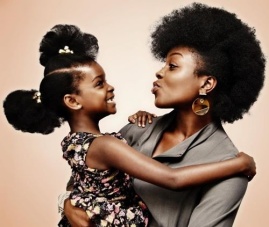 In our family, a new “first” occurred earlier that day. It was the first time one of my kids spent time away from me or my husband’s watchful eye with someone they would’ve considered a stranger. But of course, to us, it was a friend we knew and trusted well enough with our child.

It was one of our daughters’ first sewing lesson and she was very much thrilled to begin. She’s had an interest in fashion for quite some time, so it was a no brainer when the opportunity presented itself for these lessons.

For days, leading up to the class, she cheerily chatted about all she wanted to learn and daydreamed about what she would sew.

However, as the time to be dropped off drew near, some of her excitement waned and was replaced by nervousness. The realization that she would be on her own, away from us, with someone new was a bit scary.

After working through this bit of angst, she was back to her bubbly self. No later than she was off to her class did I look up at the clock to see she’d soon be returning home. Upon her arrival, she enthusiastically shared all about her achievements. It was apparent she had long forgotten about her earlier fears.

As the day continued, we found ourselves en route to Kelly Drive in order to enjoy the sunshine. On our ride, my daughter and I once again discussed her courage to participate in an unfamiliar setting. The topic soon turned to how she enjoyed her new teacher and we talked about what qualities make a good teacher:

Willing to answer your questions…

It was at this point where things took a particularly interesting turn. With no warning, my daughter offered up more than I bargained for when she blurted out,

“You’re a good teacher too, Mommy, but sometimes you can be harsh.”

This statement flowed so matter of factly from her sweet little lips I was floored!

Between my gaping mouth and eyes the size of saucers, it was beyond apparent her pronouncement had taken me aback. So much so I didn’t yet have a compartment in which to place her assessment.

I was stuck in a state of bewilderment.

In that moment her brutal honesty came from her being innocently unaware of the expected roles between mama and child. You could tell my daughter didn’t take her cue. In the typical mother-daughter relationship, her words bordered on the fine line of having the potential to get her into big trouble.

But within a matter of seconds, her childhood survival instincts kicked in and she immediately realized she should somehow find a way to soften the blow of her words. In a snap, she countered with, “I’m not trying to be mean, Mommy, just honest.”

I quickly understood her backpedaling was coming from a place of intuitive regret for having possibly placed her in the realm of consequences. I softened my face so as not to convey contempt.

Funny enough, in that instant, I actually appreciated my daughter’s candor.

I’ve always tried to foster an environment of honest reflection between us, where we can be ourselves and share openly with one another. Respect goes both ways between us while still having the freedom to exchange our ideas about how we’re impacting one another. This, my friends, was simply another one of those moments in our relationship. And I didn’t want to squander the moment by penalizing her for giving me insight into how she receives me.

The first lesson I learned that day:

Just because I didn’t like her message didn’t mean it wasn’t valid.

You see, I had a choice to make. I could’ve either come down hard on her for telling me what I didn’t want to know.

I could have simply embraced her truth. After all, this was the mommy she had come to know in times of frustration.

And with that, I sealed my fate by choosing the latter response.

I told her, “It’s okay, I appreciate your feedback.”

From there, I licked the wounds of my bruised pride and we moved on without any more incident.

But my daughter’s evaluation of my response to her in times of pressure stayed with me. I’ve turned her words over and over in my head since that afternoon.

I’ve searched my heart for any truth I might uncover. 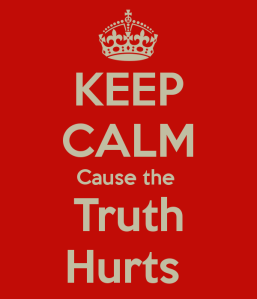 And ya know what? As much as I hate to admit it, I did find some truth there.

My daughter’s words revealed my attempts to hide my a tendency to not be slow to anger when things don’t go my way were feeble at best and ridiculous at worst.

What’s less shocking but equally disappointing is the fact that this area of unbridled anger is not foreign to me.

It has shown up time and time again when the pressure cooker of life is on. I can’t excuse it away, smile it away or even explain it away.

Friends or situations who disappoint me? I get mad at the world.

Forgetful husband? I blame every unrelated problem on his absentmindedness!

With a heart unwilling to yield its full emotional capability over to a God who is more than able to handle it, the options of how to let off steam are endless.

As I parked our van on Kelly Drive in preparation for our light hearted walk, God was once again at work in the classroom of my heart. This time, he wasn’t afraid to put my daughter in the professor’s chair.

The third and final lesson of the day AND possibly the most important:

In God’s Kingdom, he uses the foolish things of this world, the childlike things if you will, including the boldness of a nine year old little girl to speak his loving words of correction to His hard-headed daughter.

Proverbs 27:6 says, “Faithful are the wounds of a friend.”

Well, my daughter played double duty that day as my friend and she faithfully wounded me.

But oh am I so glad she did!

God got my attention that day. And by His grace, he will keep it.

I pray the same will be true for you when it’s your turn to put on the pupil hat.

This is why I submit to you; have you needed to ask those closest to you some similar test questions?

Trust me, seeking answers to these questions may seem pretty scary. But the good news is the sooner we work up the nerve to ask, we’ll be all the better for it.

It’s true, the lessons my daughter has taught me sometimes makes the role of pupil not so fun.

They give me the answers I desperately need in order to grow into who God wants me to be. Will you allow him to do the same for you?

Thanks for reading and if you like what you see, go ahead and hit that follow button and I’ll catch you next time!

Published by Courtney B. Dunlap

Christ follower. Wife. Mother. Friend. Writer...and excited to grow! I believe there's a need for more down-to-earth online spaces in which moms like you and me and anyone else in-between can explore the in's and out's of homeschooling free from competition yet rich with encouragement. My hope is that all that you find here will provide just that! View more posts

This site uses Akismet to reduce spam. Learn how your comment data is processed.